Menu
Use of pronutrients to prevent protozoan diseases

Use of pronutrients to prevent protozoan diseases 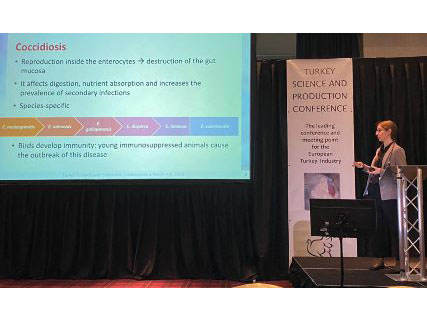 Once more, Biovet S.A. has participated in the 14th edition of Turkey Science and Production Conference held from March 4-6 in Carden Park, Cheshire (UK). Turkey producers and companies related to the sector attended the congress held annually in this English city.

This time, Dr. Júlia Pié, veterinarian of Biovet S.A., gave a conference about the protozoan diseases and how to prevent and treat them by using natural solutions. The most common problems that usually affect turkey production are coccidiosis, predisposing factor for necrotic enteritis; histomoniasis or black head disease, which can cause high mortality; and cochlosomiasis, of greater impact in United States but that causes significant productive losses and catarrhal enteritis in young birds.

Pronutrients as an alternative to prevent protozoan diseases

To treat and prevent these diseases, a synergistic combination of pronutrients based on improving the animal’s resistance was presented. This combination is marketed under the name Alquernat Coneb and is composed of:

The efficacy of pronutrients was demonstrate with a trial where turkeys were experimentally infected with Cochlosoma. Alquernat Coneb was administered in premix in feed as a prevention, and in drinking water for treatment.

With the results of this test it is demonstrated that Alquernat Coneb is a suitable product to prevent infestations and improve animal physiology.