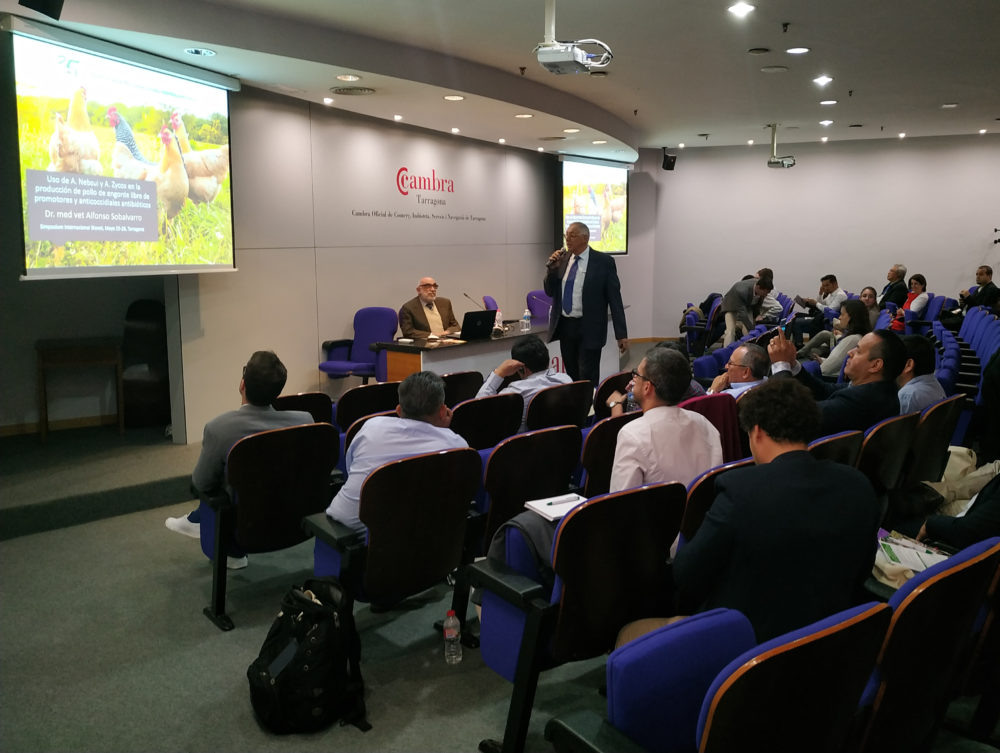 The use of pronutrients in avian production, as well as its advantages in mitigating the impact of coccidia and necrotic enteritis were the main topics in the second session of the 32nd International Symposium of Biovet.  It was held on May 27-28 at the Chamber of Commerce of Tarragona, Spain.

The session was divided into 5 talks, in which the results of in vivo and in vitro tests performed with broilers and laying hens were revealed. Amongst the highlighted products of the session, the action of additives of the Alquernat line such as liver and intestinal conditioners (Alquernat Livol and Alquernat Nebsui), intestinal optimizers (Alquernat Zycox) and natural immune boosters (Alquernat Inmuplus) were discussed in depth. Moreover, Biovet’s natural preservative and intestinal biocide Alquermold Natural was also important due to its multiple applications in avian production.

With the talk entitled “Blood biochemical analysis in birds“, the veterinarian and zootechnologist Alfonso Diaz from Colombia’s International Pharmacy SAS (INPSAS) shared the results of 3 trials performed with the liver conditioner Alquernat Livol. The assays were  conducted with ROSS line broilers and Isa Brown laying hens.

The aim of the three tests was to determine the impact on birds’ liver after the use of a natural additive with antioxidant and regenerative properties. A feed dose of 0.25 kg / T was used in two of the tests. At the same time, blood tests were also performed in order to check the production of proteins (albumin, globulin) and liver enzyme levels (alkaline phosphatase; gammaglutamyl transferase; alanine aminotransferase; aspartate aminotransferase).

The obtained results in each of the three trials revealed that the use of Biovet’s hepatoprotector in the treated specimens achieved, on the one hand, a reduction in the serum level of liver enzymes. This is an indicator of a better liver status, since it performs better digestive and metabolic functions. On the other hand, measurements of protein levels did not show significant alterations in some of the studied cases, although they were always within normal parameters. However, it was noted that levels varied markedly depending on whether the measurements were taken in fasting periods or after feeding.

In one of the tests, the comparative performance between both control and treated batches was measured (ROSS line chickens treated with pronutrients at 0.25 kg / T feed). The latter showed better values in average weight (kg), better feed conversion and feed efficiency (FCR and EI), better productivity index (PI), and lower mortality rates compared to control batch. Results obtained in the measurement of average weight and feed consumption (kg) in batch treated with Alquernat Livol and control batch. Source: INPSAS

Intestinal conditioners and optimizers in broiler chickens and laying hens

Dr. William Ruiz gave details on the results obtained in three trials carried out with Hy-Line Brown and Lohman LSL laying hens, ranging from 1 to 100 weeks old. In the first two, birds were fed a diet supplemented with a premix of the intestinal conditioning additive (0.50 kg / T); on the third, supplementation was added on drinking water (1 ml / L ).

It is worth mentioning that Alquernat Nebsui is an intestinal conditioner specifically designed to optimize the absorption of vitamins, minerals, amino acids and other nutrients present in the diet. In this sense, improvements in digestive and immune health are not the only parameters to be evaluated, but also the measurement of the benefits that this product brings to the overall quality of the produced eggs.

The 3 experiments tried to contrast the productive parameters generally evaluated in layers – production (%); egg quality (weight, shell colouring, yolk pigmentation); and broken eggs index – obtained on treated batches against the average production standards of each of the two breeding lines. Also, one of the tests also evaluated the incidence of Gallibacterium annatis (Pasteurella) during the examined productive stage.

In summary, in the test conducted with Hy-Line layers (dosed with 0.50 kg premix / T of feed), obtained egg production was above the genetic line standards by + 2.18% at week 40 of age, and by + 4.46% at week 74, respectively. In relation to broken eggs index, a maximum reduction of -62.12% below the standards was achieved. Better results in eggshell colouring at a rate of 12 to 13 on the Roche scale were also achieved. Regarding bacterial reoccurrence, no cases of Pasteurella were detected.

The test carried out with the Lohman LSL line in both its rearing and production stages, was aimed at evaluating the efficacy of Alquernat Nebsui as a substitute to antibiotic growth promoters (AGP). In doing so, antimicrobials were withdrawn from the diet and the intestinal conditioner was supplemented instead (1 ml / L of drinking water). As it occurred in the previous trials, there was no control batch since genetic line productive standards were taken as reference.

Dr. Alfonso Sobalvarro focused his talk on the production of broiler chickens free from antibiotic growth promoters (AGP) and anticoccidial antibiotics. In line with the previous talk, the intestinal conditioner Alquernat Nebsui was presented as an alternative to the use of AGP. Moreover, the discussion revolved around the beneficial effects of the combination of this product with the intestinal optimizer Alquernat Zycox

Doctor Sobalvarro revealed data obtained from an experiment with broilers sorted by gender and treated with both products combined. Weight and mortality performance were measured in a total of two occasions. Although the results were similar for both tests, male specimens showed higher mortality rates compared to female batches.

Intestinal biocides: bactericidal action against Clostridium perfringens and alternatives for the prevention and treatment of avian necrotic enteritis

The natural preservative and intestinal biocide Alquermold Natural was the protagonist of the talks focused on coccidiosis and the proliferation of Clostridium perfringens, as a triggering factor of necrotic enteritis outbreaks in avian farms.

Results revealed that the presence of Clostridium perfringens was barely non-existent in the well plates corresponding to the highest product dose (400 parts per million, 0.4 kg / t). Consequently, a dose-effect relationship can be established, with the highest doses of Alquermold Natural being those that showed highest biocidal efficacy.

Microscopic view of enterocytes and Clostridium perfringens. Concentrations of Alquermold Natural in parts per million (ppm). The fusiform formations correspond to the enterocytes and those that have a bright halo to Clostridium.

In the same line, Dr. Greg F. Mathis from Southern Poultry Research Inc. of Georgia, United States, complemented the session with the talk entitled “Use of Alquermold Natural and Alquernat Zycox for the treatment and prevention of Necrotic enteritis“.

From the perspective of the US poultry sector, Dr. Mathis made a general assessment on the problems faced by this industry. It focused on widespread concerns on the part of producers regarding the effects of coccidiosis (infection caused by 7 variants of the Eimeria parasite) as a prelude to the proliferation of the bacteria Clostridium perfringens, and to the consequent appearance of necrotic enteritis outbreaks in birds. It should be borne in mind that this pathology causes significant economic losses by provoking injuries into the digestive system and the intestinal mucosa of birds. Worsen nutrient absorption leads to weight loss and an increase in feed conversion rates and mortality.

Dr. Mathis raised the need to find new treatments – some of the chemical anticoccidials and ionophores used nowadays are more than 50 years old. Even more so at a time when public opinion and changes in legislation are gradually forcing the abandonment in the use of some anticoccidial products (ionophores), due to the growing emergence of resistances and its consequences on public health. Gradual reduction in the use of antibiotic treatments in the USA. 2013-2017. Source: US Broiler-Health Market Tracker (2017)

In this context, Dr. Mathis raised the need to work on new effective prevention measures. These entail improvements in the management of farms; the use of vaccines against coccidia (attenuated and not attenuated); or nutritional supplementation with additives that strengthen the intestinal microbiota for a better use of nutrients and, thus, reducing the effects of possible enteric diseases.

The talk was complemented by a trial conducted at the Southern Poultry Research Group facilities, in which the effectiveness of the preservative Alquermold Natural combined with a vaccine against coccidiosis was tested. On the one hand, its efficiency was studied as a preventive method of necrotic enteritis when continuously supplemented in premix format in the diet. On the other hand, as a treatment when subministered in drinking water in the initial stages of an outbreak of the disease (7 days from its detection).

Results obtained in both tests revealed that it is possible to reduce the negative effects caused by necrotic enteritis: mortality rate was reduced; feed conversion rates were improved; and treated birds successfully gained weight with both premix and oral solution variants of Alquermold Natural.