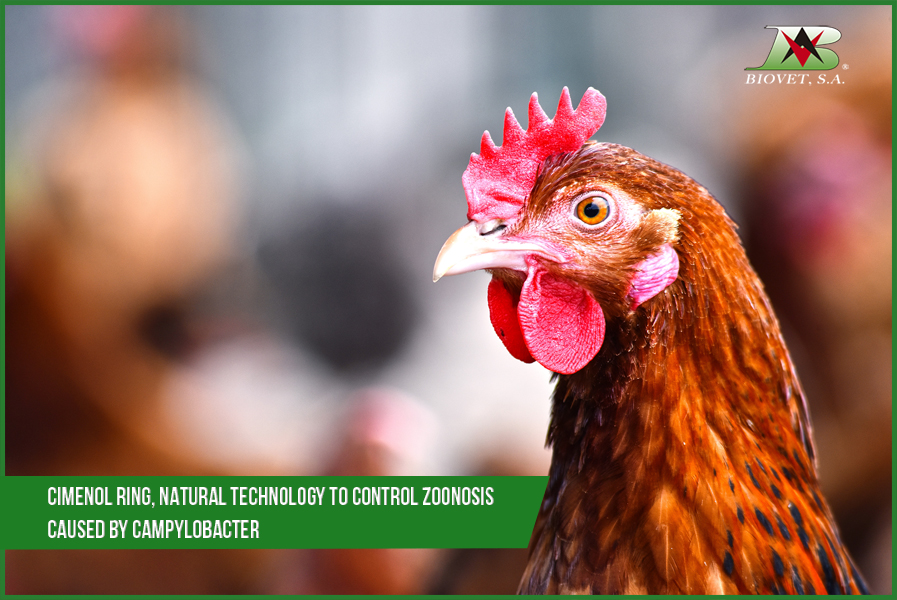 In recent years, concern about food safety has increased globally. Several zoonosis control measures have been implemented in slaughterhouses and food processing plants. Despite this, foodborne diseases still are a problem of great impact for the global population.

Traditionally, different types of bacteria, such as Salmonella, have concerned both consumers and administrations. However, there are many other bacteria capable of causing zoonosis, so it is essential to apply control measures from their origin, that is, the animal itself. An example is the case of Campylobacter. This agent is the main causative microorganism of gastroenteritis worldwide, producing from 5% to 14% of diarrhoea cases in humans. Therefore, it is very important to control this microorganism from its origin, the animal itself, and apply measures to avoid cross contaminations.

There are different strains of Campylobacter capable of causing zoonosis, and most of them come from the intestine of birds, both broilers and layers, as well as pigs and ruminants. Therefore, a reduction of the intestinal concentration of this microorganism is key to reduce the chance of zoonosis. This way, the natural technology based on the cimenol ring, developed and patented by Biovet, S.A., has been proven to be very effective in reducing intestinal pathogen load, including Campylobacter.

Reducing the concentration of Campylobacter by using cimenol ring-based solutions

As previously described, the different strains of Campylobacter are found naturally in the gut of animals, most of them are harmless to the animal itself, except for Campylobacter hepaticus, which could be involved in specific bacterial hepatitis. Since Campylobacter strains are excreted in the faeces, they can contaminate the feed, further increasing the intestinal load of Campylobacter. Therefore, it is essential to control this microorganism in the intestine itself and the feed by reducing its concentration.

Biovet S.A. has developed a natural technology based on the synergy of cimenol ring with citric acid that has antimicrobial capacity to reduce the microbiological load, both in intestine and feed. Cimenol ring breaks the membrane of microorganisms destabilizing the lipid bilayer, while citric acid creates pores in the microbial membranes and facilitates the entry of the cimenol ring inside the pathogens. Both compounds are part of Alquermold Natural, a natural antimicrobial patented by Biovet S.A.

Alquermold Natural’s antimicrobial capacity has been tested following the scientific method in several trials, both in vivo and in vitro, against many microorganisms. Recently, the ability of Alquermold Natural to reduce the concentration of Campylobacter in laying hens has been evaluated in comparison with certain organic acids and formaldehyde, compounds commonly used in poultry industry for the same purpose. 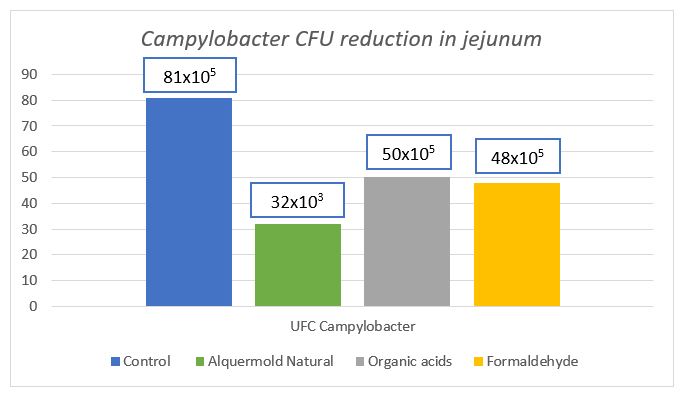 Graph 1: Results of a test carried out in hens during the laying phase, where colony-forming units (CFU) can be observed with the use of different antimicrobials

In graph 1, the microbiological results of the trial can be observed. Campylobacter colony-forming units (CFU) in hens fed Alquermold Natural are markedly lower compared to the other batches. Alquermold Natural achieves a 99.6% Campylobacter CFU reduction in jejunum compared to the control, while organic acids only achieve a 38.27% reduction and formaldehyde a 40.74% reduction. This demonstrates the high efficacy of this patented technology of Biovet S.A. in the intestinal reduction of this bacteria.

Alquermold Natural not only reduces Campylobacter intestinal load, but also reduces the concentration of other microorganisms such as E. coli or Clostridium, among many others. This is related to a reduction in dirty eggs, since it can be observed that Alquermold Natural obtains the lowest percentage, which means a reduction of 65.51% compared to the control. Organic acids reduce the dirty egg percentage less effectively, and formaldehyde even increases dirty egg percentage compared to the control, maybe due to the damage that this irritating compound produces on the digestive tract.

Both aspects, the reduction of the intestinal load of microorganisms such as Campylobacter, and the dirty egg reduction, have a positive impact on public health, and reduce the chances of food zoonosis caused by Campylobacter.

Consumers and administrations’ concern for food safety is constantly increasing because of the high prevalence of many food zoonoses. Campylobacter is one of the main bacteria causing gastroenteritis worldwide, and it mainly comes from the intestine of birds. Alquermold Natural, a plant-based technology developed and patented by Biovet S.A. has been shown to be highly effective in the intestinal reduction of Campylobacter, of up to 99.6%. This efficacy has also proved to be greater than that of other products used for the same purpose, such as organic acids or formaldehyde, which only achieve a 38.27% and 40.74% reduction, respectively.

A decrease in the intestinal microbial load is related to a reduction in the percentage of dirty eggs, which only represents 2.29% with the use of Alquermold Natural, while organic acids and formaldehyde obtain 5.18 and 12.15% respectively.

The decrease of the intestinal load of Campylobacter and the percentage of dirty eggs thanks to Alquermold Natural allows to increase food safety, because there is a greater control of zoonosis caused by these bacteria.