Preservatives of natural source, protagonists in the II International Conference on Necrotic Enteritis 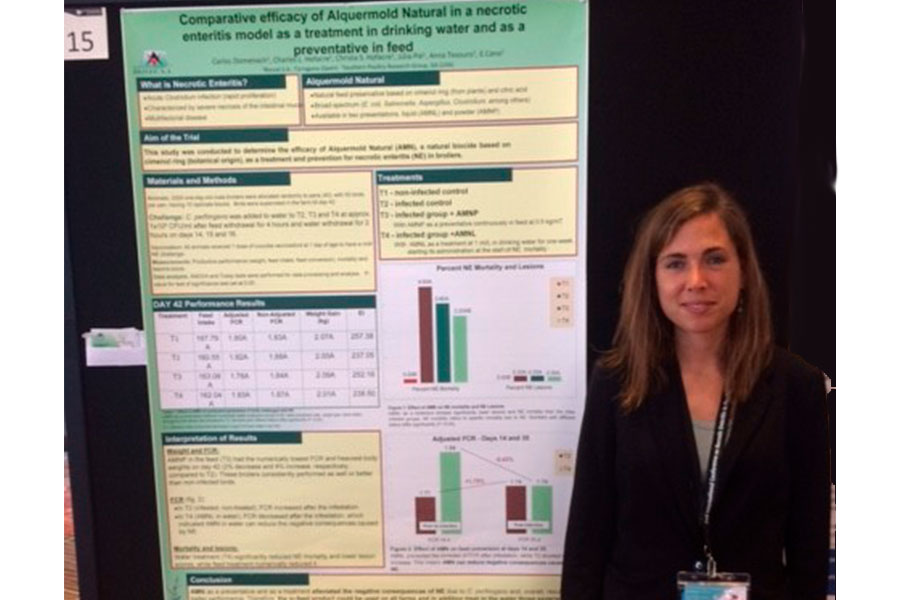 Preservatives of natural source were protagonists at the II International Conference on Necrotic Enteritis, which was held on July 11th, and 12th, 2018 in Colorado, USA. During the event, Dr. Veterinarian of the technical team of Biovet S.A., Elvira Cano, gave a lecture on July 12th on the results of trials to determine the effectiveness as a treatment and preventive of necrotic enteritis of the natural biocide, based on the cimenol ring (of botanical origin), Alquermold Natural.

Necrotic enteritis (NE) is an acute infection caused by the Gram-positive microorganism Clostridium perfringens, which is characterized by severe necrosis of the intestinal mucosa in its clinical form with high mortality rates and lowering of the productive parameters in the subclinical form. Clostridium perfringens is a sporulated bacterium resistant to thermal treatments up to 120ºC, which is why it is not eliminated by the pelleting processes and that it uses as nourishment the non-digestible protein existing in the feed of the animals and in the litter. For this reason, “is currently one of the diseases more frequently seen in poultry farms in all countries, especially in broiler farms.”

On the causes of necrotic enteritis (NE) Dr. Cano emphasized that “proper functioning of the intestine and, in general, the digestive system, is essential to ensure proper growth in broiler chickens.” In her opinion, “due to highly concentrated diets and intensive breeding conditions, which expose animals to high infective pressures, the intestine is constantly under pressure.”

As explained by the representative of the technical team of Biovet, S.A: “The prevention and maintenance of intestinal flora is a key factor to prevent dysbacteriosis, promoting the growth of pathogenic microorganisms such as Clostridium perfringens. Therefore, it is very important to implement a comprehensive management plan to prevent or reduce the infection. The elimination or reduction of the development of pathogenic microorganisms in the diet and the control of the intestinal flora must be included in this management plan”.

The Alquermold Natural is a preservative, bactericide and fungicide for raw materials and compound feed where the action of an active principle of natural origin, the cimenol ring, is combined with citric acid. The cimenol ring is found in extracts of plants such as Thymus vulgaris, Origanum majorana, Origanum vulgare, Mentha piperita, Ocimum basilicum or Salvia officinalis and is active against bacteria, fungi and yeasts.

“Thanks to its bactericidal and fungicidal propierties, the cimenol ring controles the pathogenic flora of the intestine, such as Salmonella, E. coli, Clostridium spp. o Staphylococcus sp. By having a specific microbiocidal activity for pathogenic bacteria, and benefits their growth”, underlined Dr. Veterinarian, adding:” Alquermold Natural is available in two formats, our recommendation is to use powder as preventive and in liquid as treatment”.

Also, during the conference, Dr. Cano presented an essay conducted last year in an experimental farm at the Scientific University of the South, Lima (Peru), which demonstrates the effect of Alquermold Natural premix as a preventive. before a challenge with Clostridium perfringens in broilers. There was no alteration of the productive parameters in the batch where the animals were supplemented with Alquermold Natural at a dose of 0.5kg / tn throughout the production cycle. “Not only a decrease in productivity is not observed, but the productivity of this lot is even greater than that of the uninfected control thanks to the improvement of the overall balance of the intestinal flora” said Dr. Veterinarian.

In this same trial, it is also demonstrated that againts an outbreak of necrotic enteritis the liquid Natural Alquermold can be used as a treatment when the outbreak has already been established, reducing the damage and improving the productive parameters.

On the other hand, during II International Conference on Necrotic Enteritis, Biovet S.A. presented a scientific poster that showed the results of a study conducted in 2018 in Southern Poultry Research Group (SPGR) USA, to determine the effectiveness of Alquermold Natural, as a treatment and preventive of necrotic enteritis in broilers. The productive performance, the mortality and the degree of the injury were evaluated in the trial. “This study validates the data from the trial carried out at the Scientific University of the South, Lima (Peru), that is, similar results have been reported in two trials, which is much greater than the product’s effectiveness,” concluded Cano.