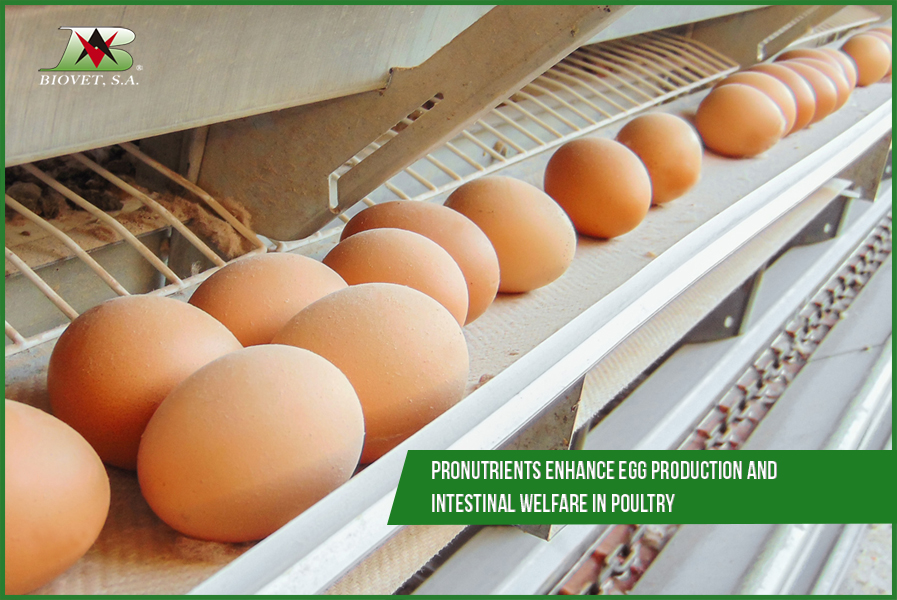 Recently, Biovet S.A. conducted an in vivo trial in a laying hens farm to evaluate the efficacy of intestinal conditioners pronutrients during the rearing and laying periods. The product evaluated was Alquernat Nebsui, and it demonstrates an improvement in egg production and egg quality.

In poultry farming, the rearing period of pullets is a key stage in their development that will allow them to achieve maximum performance during laying. Therefore, the objective during this period is to obtain the optimal genetic expression, achieving the breed standard weight uniformly in the lot.

To achieve the productive objectives, it is essential to ensure a good condition of the digestive system of the poultry. The structure of the intestinal mucosa determines the level of absorption of nutrients that are necessary for their development. In addition, this intestinal welfare plays a key role in the physiology involved in egg formation and laying.

The study was conducted in laying hens

The study developed by Biovet S.A. was conducted in 2021, using a population of 30,329 laying hens, used as a treatment group. To compare the results obtained in this poultry, the standard parameters of the breed were used.

The intestinal conditioners pronutrients, Alquernat Nebsui, were added to the drinking water during the rearing period from week 0 to week 28 of life. The method of application was continuous for two weeks each month at 1mL/L of drinking water. Subsequently, during the laying stage, Alquernat Nebsui was added from week 29 to week 60 of life, applying it in the same way.

Among the results obtained from the Biovet S.A. study, it was found that hens that received the intestinal conditioners pronutrients, Alquernat Nebsui, were able to reach a standard weight while consuming less feed during rearing. On the other hand, it was observed that in the laying stage there was a higher egg production, as well as persistence in the laying peak. Finally, egg weight and egg quality increased significantly.

With the results of this study, a positive impact of intestinal conditioners pronutrients on feed digestion was found. Thanks to this, intestinal absorption is favored and there is a noticeable improvement in egg production and quality.

Finally, the study highlights other characteristics of Alquernat Nebsui. On the one hand, it highlights that the pronutrients that compose it are natural solutions of botanical origin that do not generate resistance. In addition, they can be used continuously since they have no withdrawal time and do not leave residues in eggs.