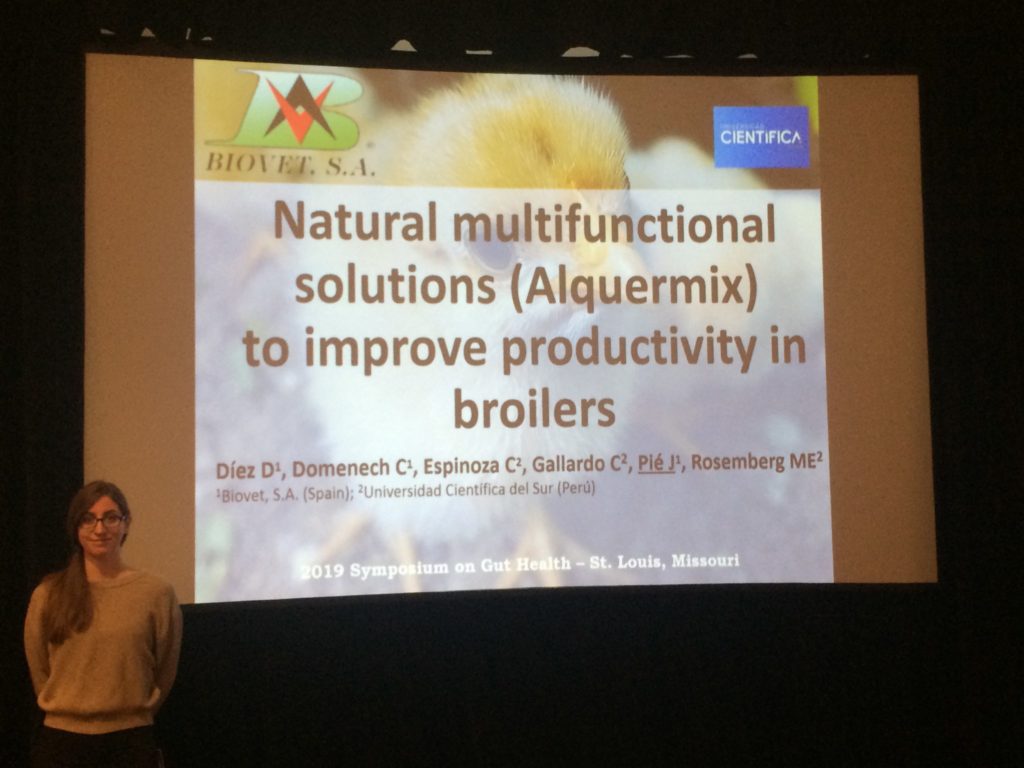 In November, a technical and commercial team of Biovet S.A. visited the United States to meet representatives from leading poultry, pig and turkey farms interested in the use of natural additives to improve health and nutrition of their animals. In addition, on Wednesday 6 November, Dr. Júlia Pié gave the conference ‘Use of Natural Multifunctional in Animal Production’ in the framework of the Symposium on Gut Health that was held in St. Louis (Missouri).

South Carolina, Georgia, Ohio, Missouri, Arkansas and North Carolina were the states visited that time. Meetings were mostly arranged with producers and nutritionist of broilers, pigs and turkeys farms. The latest developments related to pronutrients line of Biovet S.A. were presented:

For broilers producers, one of the products that caused the greatest interest was Alquermold Natural. A natural preservative indicated for the prevention and treatment of necrotic enteritis. This is one of the main pathologies that affects the American continent and causes many economic losses.

On the other hand, Alquernat Zycox was also presented. It is an intestinal optimizer that can substitute amprolium and chemical coccidiostats on top. Finally, the natural immunoestimulant, Alquernat Immuplus, and its use for the improvement of the immune response in in ovo vaccines was introduced.

For pig producers, it was presented the intestinal conditioner, Alquernat Nebsui, contains pronutrients which promote the regeneration of enterocytes and improve the absorption of nutrients. It is indicated for the prevention of post-weaning diarrhea and allows the antibiotic replacement. In addition, it is presented as a natural alternative to replace zinc oxide.

Alquernat Coneb, intestinal optimizers and conditioners prnutrients, was the most outstanding product for turkeys. It is a natural product which stimulate the regeneration of the digestive mucosa and make sure the local immune system in the gut is working properly. Its use protects the digestive system of the animal from protozoan infection such as Cochlosoma.

Conference in the Symposium on Gut Health

In St. Louis (Missouri), Dr. Júlia Pié, veterinarian of Biovet S.A. presented a conference about the use of the Alquermix multifunctional in the production of broilers. The conference was given in the Symposium on Gut Health, held annually in this north American state.

The conference was about a trial of Alquermix, Alquermix is a multifunctional additive that contains nine products such as mycotoxin binders, preservatives, enzymes, probiotics and pronutrients. It should be noted that Alquermix can replace these additives usually added in feed. Furthermore, its formula can be adjusted to the needs of every productive stage and specie.