Menu
Presence Biovet S.A. with a booth at VIV Asia 2023

Presence Biovet S.A. with a booth at VIV Asia 2023 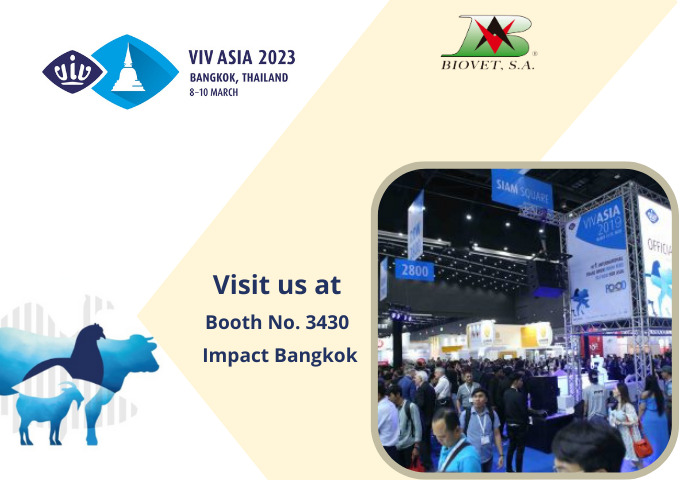 VIV Asia has become an international trade fair of reference in animal production and processing of meat, eggs, fish and milk. With the participation of more than 1,200 exhibitors from more than 120 countries, VIV Asia is the most important event in the area.

Facing the global trend of limiting the use of antibiotics as growth promoters in animal production, on long term, producers have to look for alternatives to replace them. Natural additives are an efficient alternative, with good productive results demonstrated in in vivo and in vitro tests.

Intestinal conditioning pronutrients are natural active molecules that improve intestinal integrity and digestive processes, and have a positive impact on productive results. They represent a natural alternative to the use of antibiotic growth promoters (AGP) such as bacitracin and other chemicals with a promoting effect such as halquinol.

Intestinal conditioner pronutrients are the most effective solution to obtain a good productive performance (better weight, conversion rate and productive efficiency) compared to the use of promoters. The use of intestinal conditioner pronutrients allows to improve the morphology of the villi, providing a greater absorption surface, as well as increasing the production of mucin and strengthening the protective barrier at the intestinal level, compared to the use of growth promoters.

On the other hand, in laying birds, conditioner pronutrients improve the internal quality of the egg and the laying percentage.

In addition of being more effective, pronutrients have additional advantages, such as that they do not require a withdrawal period, do not leave residues, and are 100% natural substances. Alquernat Nebsui, a product developed and marketed by Biovet S.A., is a 100% natural additive, composed of intestinal conditioner pronutrients.

The conservation of grain and balanced feed is an essential element to maintain its nutritional and microbiological quality and is based on the control of microorganisms (fungi and bacteria) that cause its deterioration. Classical methods use products based on organic acids.

In recent years, natural alternatives have been found for the preservation of food and raw materials that allow the elimination of microorganisms and keep feed in optimal conditions on the short and long term.

An alternative is Biovet S.A.’s natural preservative, Alquermold Natural, a product based on natural extracts that has demonstrated its efficacy in numerous trials as a bactericide and feed preservative.

Alquermold Natural is a natural preservative that is presented as an effective alternative to organic acids. It has many advantages: it has a broad spectrum of action, it completely eliminates microorganisms and it is not corrosive. In addition, the use of this fungicide and bactericide has demonstrated its effectiveness in preserving feed on the long term.

In addition to its preservative action, Alquermold Natural has an effect on the digestive tract to control pathogens such as Clostridium, Salmonella or E. coli, among others.

During the 3 days of the fair, the technical-commercial team of Biovet S.A. awaits you at booth No. 3430, to answer all your questions and offer information about our products.