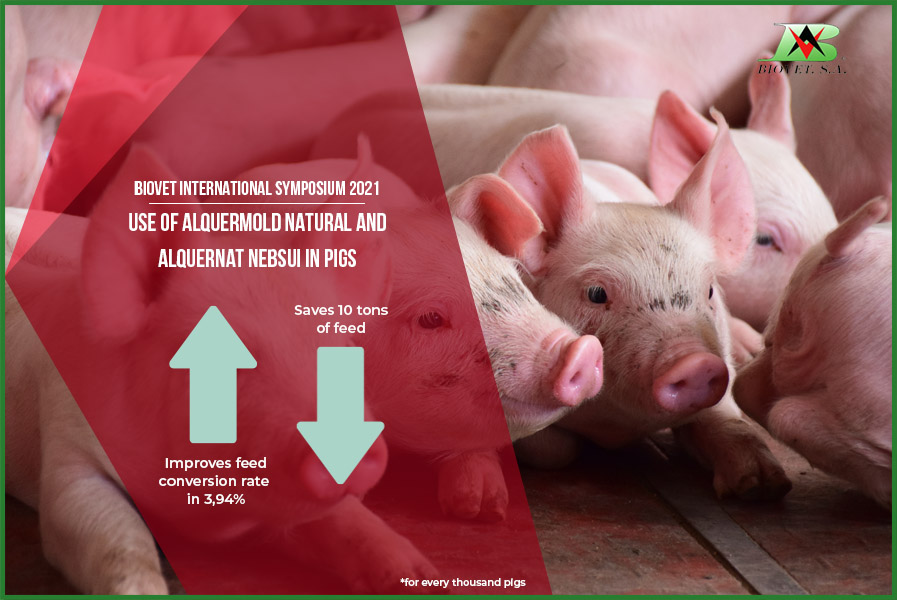 The Biovet International Symposium was held on 18th March 2021 online. In the workshop two conferences were presented about the use of mycotoxin binders and natural solutions to mitigate the impact of mycotoxicosis and promote intestinal integrity and animal welfare in pig production.

Dr. Maria Soriano presented the conference ‘Prevention of mycotoxicosis and liver damage with a mycotoxin binder based on Silicoglycidol and liver conditioner pronutrients in pigs’. The conference highlighted the impact of mycotoxicosis on animal production and the importance to maintain liver function to alleviate its toxic effects.

Mycotoxins are fungi metabolites that can cause enteritis and have toxic effects on animals. The high percentages of fungui contamination in feed mean that feed can be frequently contaminated by more than one mycotoxin, simultaneously. In addition, mycotoxins have a synergistic effect, which enhance their toxic effect. It is extremely important to prevent the absorption of mycotoxin, even at low concentrations.

Some mycotoxins, such as aflatoxins and ochratoxins, can damage liver, worsening liver function and decreasing its detoxification capacity. In addition, when mycotoxin reach liver, protein production decreases and, consequently, meat production. The immune system is also weakened.

Pigs supplemented with the combination of Silicoglycidol and pronutrients obtained greater weight after four weeks of trial (+0,76 kg/animal), a higher weight gain (+23,57 g/día) and a better conversion rate (1,2% better), despite to receive contaminated feed. It also demonstrates lower levels of serum enzymes indicative of liver damage, such as alanine transferase (ALT) and aspartate transaminase (AST), which shows that the liver of these animals was in better condition. These results showed that the product can reduce the negative effects of mycotoxins thanks to its ability to prevent their absorption, as well as promote liver regeneration and protect it against the toxic effects derived from mycotoxicosis.

On the other hand, in the Biovet International Symposium, Dr. Maria Soriano, veterinarian of Biovet S.A., presented the conference ‘Use of natural preservatives and intestinal conditioner pronutrients to replace antibiotics in fattening pigs’.

Natural products are presented as effective solutions to promote intestinal integrity, with a positive impact on production parameters and, additionally, they allow to reduce the use of antibiotics.

In the trial, which was carried out in a commercial fattening pig farm in Mexico, the natural preservative, Alquermold Natural, was tested in combination with intestinal conditioner pronutrients, Alquernat Nebsui.

Alquermold Natural has a bactericidal and preservative effect that promotes intestinal welfare. Alquernat Nebsui, improves the function of enterocytes, regenerates the intestinal epithelium and increases the absorption of nutrients.

The trial evaluated the productive performance of a batch with 5033 pigs supplemented with the products mentioned. The results were compared to the ones obtained in a batch of the same farm raised the previous year, which received a greater quantity of antibiotics. Compared with the historical one, the batch with natural products obtained a 40% reduction in mortality, a lower loss of animals (25.34%) and an improvement in the conversion rate of 3.62%. Regarding the standard, the improvement was 2.09% in feed conversion and 5.33% by weight.

The combination of Alquermold Natural and Alquernat Nebsui demonstrated a sinergystic effect and its positive effect as a natural effective solution to improve intestinal welfare and reduce the presence of residues in pig production.