Menu
Silicoglycidol prevents the effects of deoxynivalenol, one of the most prevalent mycotoxins in 2020

Silicoglycidol prevents the effects of deoxynivalenol, one of the most prevalent mycotoxins in 2020 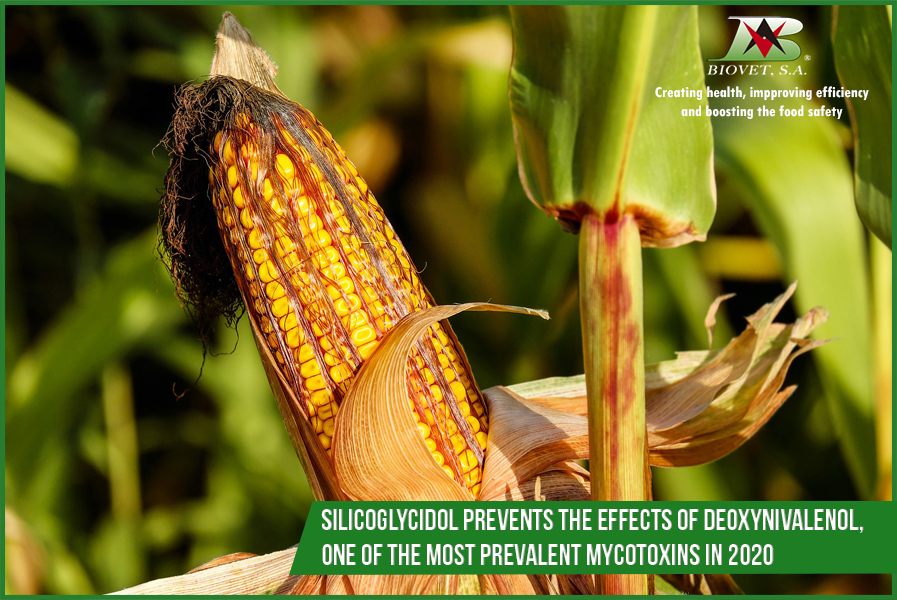 Mycotoxins are fungal metabolites often found in the feed and harmful for animals. There are different types of mycotoxins produced by different species of fungi and their presence depends, mainly, on the conditions of the environment and the storage of raw materials.

In 2020, rain and temperature swings resulted in high levels of fungal contamination in the field, which caused feed and raw materials to be highly contaminated.

Despite the presence of each mycotoxin varies depending on the region, DON was the most prevalent mycotoxin globally in 2020, according to the analysis conducted in different geographical areas.

Deoxynivalenol (DON), also called vomitoxin, is 2020’s most important mycotoxin in the feed

The toxicity of this mycotoxin is based on a necrotizing effect, as it irritates the digestive tract of animals, from the mouth to the gut, and on its capacity to damage the internal organs once it is absorbed. Animal products may contain residues of this mycotoxin, which makes it dangerous for humans, too.

To establish safe levels for this mycotoxin is complicated because toxicity depends on many factors, such as the dose, exposure time, and on the species and age of the affected animals. Moreover, this mycotoxin acts synergistically with others: even at low concentrations, it can have a negative impact on health and productivity in the farms. There are many other negative consequences derived from DON intake, since the lesions is causes in the digestive tract make animals prone to suffer other infections.

As an example, chronic intake of feed contaminated with 1 ppm of DON decreases feed intake and growth rate and causes immunodepression in poultry and pigs.

Silicoglycidol, a molecule developed by Biovet S.A., was the first mycotoxin binder to be patented in the world. Its superior efficacy, compared to other binders, is due to its unique structure. Using Silicoglycidol is highly recommendable since it prevents the harmful effects of vomitoxin and those of other mycotoxins that may be present in the feed.

Thanks to its optimized structure, it presents efficacy at low doses and a broad spectrum of action: it is effective against the main mycotoxins and prevents them from acting synergistically to cause toxicity in animals.

The efficacy of this molecule has been studied both in in vitro and in vivo trials, in ruminants and monogastrics, and has demonstrated a binding efficiency of over 84% for DON. This percentage considers the real effectiveness of Silicoglycidol throughout the digestive tract, that is, it takes into account the pH variations in the digestive tract of the animal.

Prevents toxic effects in poultry and pigs, highly sensitive to this mycotoxin

The high toxicity of DON and its high prevalence in raw materials globally are sufficiently important reasons to employ control mechanisms to prevent its toxic effects. In fact, the use of Silicoglycidol is highly recommended, since, in addition to preventing the harmful effects of vomitoxin, it also avoids those of the other mycotoxins present in feed.

Field trials proved that Silicoglycidol at 0.5 kg/t in pigs fed DON-contaminated feed can prevent the toxic effects and, consequently, improve feed conversion by 10.24% and reduce liver damage, which is observed as a decrease in AST (-2.5%) and ALT (-0.75%) blood levels.

Silicoglycidol’s protective effect has been proved in other species, such as chickens, in which it did also prevent mycotoxins’ toxic effects on productive performance.

Deoxynivalenol is 2020’s most prevalent mycotoxin in feed and raw materials. Since it is almost impossible to completely avoid the presence of mycotoxins in feed, the most effective prevention mechanisms are based on mycotoxin binders.

Adding Silicoglycidol, the first worldwide patented mycotoxin binder molecule, to feed is a highly effective solution against mycotoxins because of its low dose, broad spectrum of action, which protects against DON and other mycotoxins, and improve productive performance.